Hands No.2 was commissioned as part of the celebration for Her Majesty's Eightieth Birthday in 2006. Aowen later received a letter from Her Majesty expressing her delight about the artwork. It now resides in the Queen's private collection.

'Brilliantly conceived and well executed, Aowen could start a new artistic trend with her style of work'
Canary Wharf Magazine

Aowen worked with girls from Far East Asian backgrounds to question the Western understanding of these often very private people living in Britain today. These girls rarely mix with mainstream culture, however with their exotic appeal, they frequently evoke the western perceptions of Orientalism.

The artworks stir the viewers' senses and sensuality with a subtle and alluring glimpse of impossible images. But is this illusion real? Without knowing the girls, one can hardly guess what is going on behind the red curtains. What the viewers can't see becomes more crucially important.

The frustrating reality of not knowing the story behind the curtain encourages the imagination of the viewers, which represents the reality of true Orientalism - a mere fiction of Western imagination.

Aowen was chosen as the official ambassador for Free Range 2006, out of 2,200 other artists who exhibited during the show. 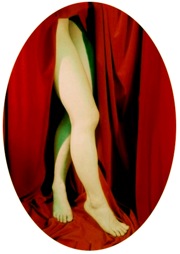 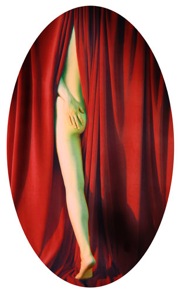 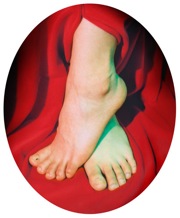 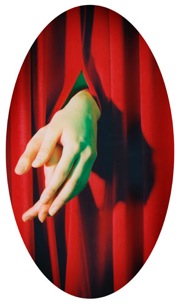 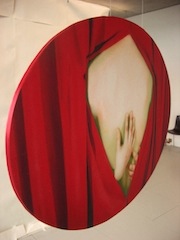 "Aowen Jin's group of paintings, Two Nudes, hung freely from the ceiling so I very nearly walked into them. This Goldsmiths College graduate is of Chinese origin and painting on textiles (traditionally silk) is part of her native culture."

"Fascinated by body language, Aowen photographed real people in set poses, digitally manipulated the pictures to achieve the right balance of light and shade and a more surreal effect, then painted the final composition." 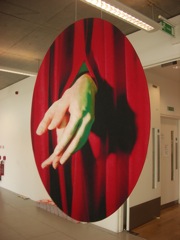 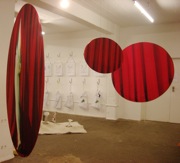 "Aowen had actually painted calico to look like the most luxurious, tactile, velvet. Layer upon layer of tonal work had created the illusion of folds of red drapes drawn back to reveal sections of bare bodies, like a picture from a naughty Victorian peep show." 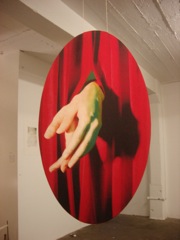 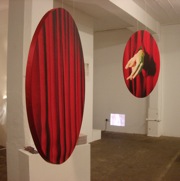 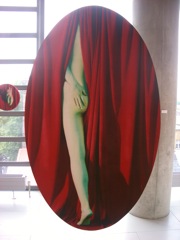 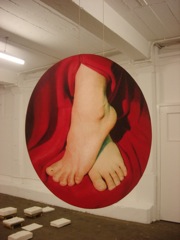 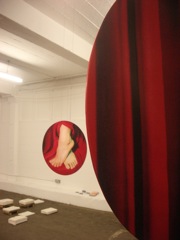 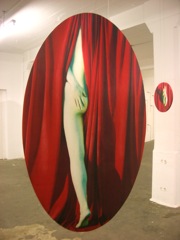 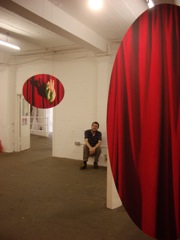 "Her work engages the viewer with its ambiguity about which body part belongs to whom. Are they male or female? And that lighting effect that subtly draws the eye up to the groin... ooooh; what's going on there?" 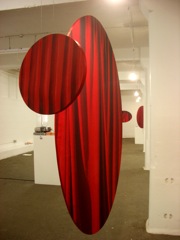 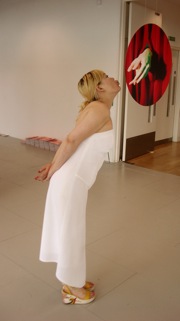 "A second look at the big toes in ‘Two Legs’ revealed two right legs which intensified speculation about the whole painting. I found myself sinking behind the suspended canvas, my imagination expecting more flesh to be revealed on the back... but the voyeurism was frustrated! Another depiction of a sumptuous curtain concealed the intimate goings-on." 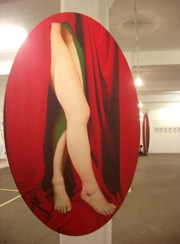 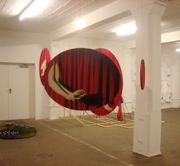